It is very difficult to be innovative at the highest level in any discipline. For some chefs, it’s simply a matter of combining ingredients, but that’s something you can do with your eyes closed. 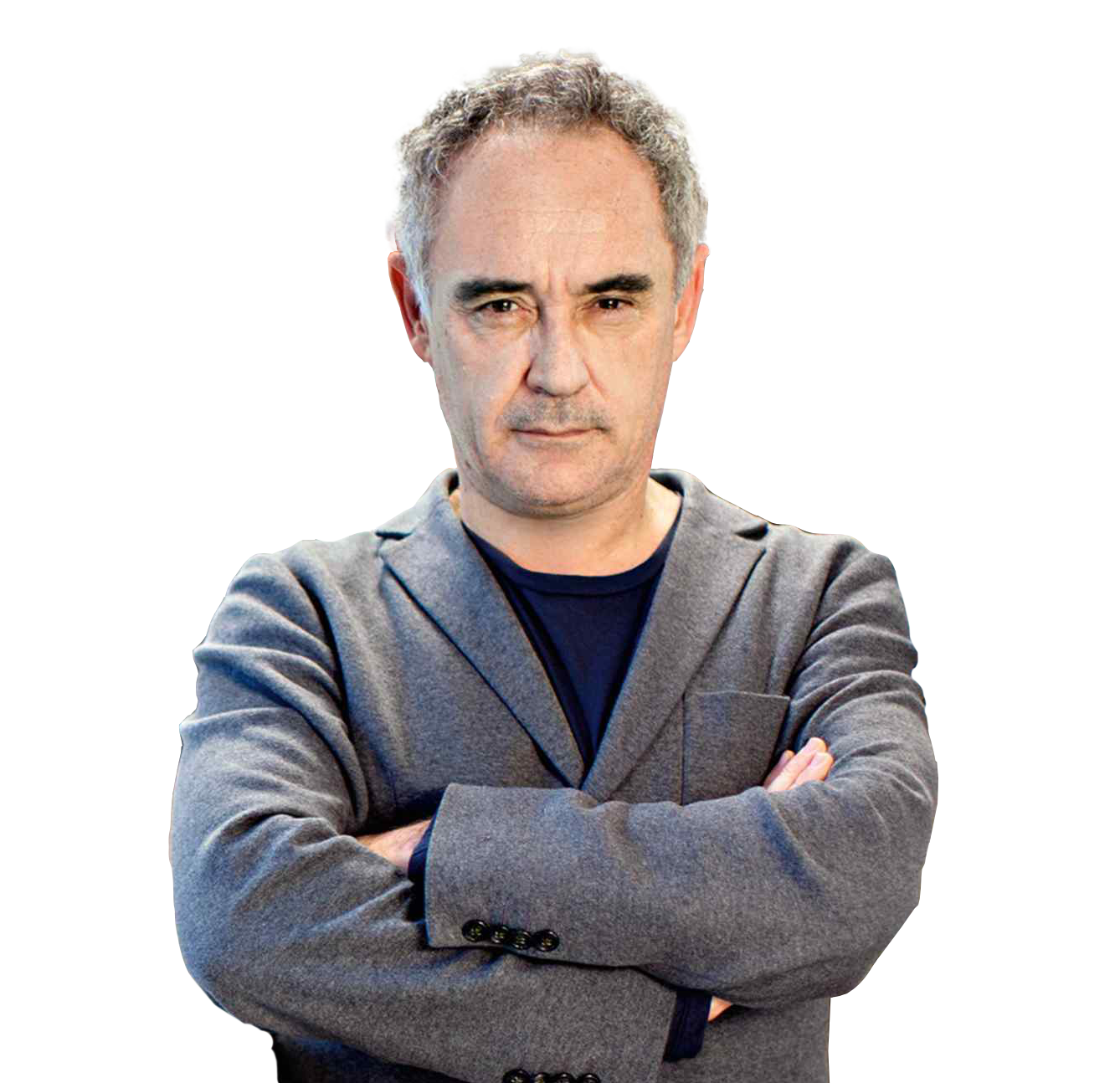 Ferran Adrià Acosta, born in L’Hospitalet de Llobregat, Barcelona, Spain, attends the local Casal dels Àngels School and then goes to San Isidro School in Barcelona, while living with his parents, Ginés, a plasterer, and Josefa, a housewife, and his brother Albert. His passion is football, and he plays with the Juventud de l’Hospitalet club until 1974 and with Santa Eulàlia F.C. until 1980. At this moment he has almost no interest in cooking, typical of a boy of his age.

In 1977 he enters Instituto Politécnico de la Merced to take administrative studies, as a prelude to a degree in Business Studies.

In 1980, he decides to give up his studies, preferring to make some money so that he can go on holiday to Ibiza. With this aim, by chance he begins his culinary career modestly, going to work as a dishwasher at the Playafels Hotel in Castelldefels, near L’Hospitalet.

There, chef Miquel Moy, a close friend of his father, helps him to become familiar with basic culinary techniques. A few months later, in 1981, he starts work at the Club Cala Leña, in Es Canà, Ibiza. After four months, he returns to Barcelona, performing varied tasks in establishments such as El Suquet, Castell Arnau and Martinique. In 1982 he finds a job in the prestigious Finisterre restaurant, staying there until he leaves to do military service, on July 2nd, 1982.

From mid-1982 until the end of 1983, Ferran does his military service in Cartagena, forming part of the team working in the Admiral’s kitchen. Here, for the first time, he takes charge of the kitchen. Assuming such responsibilities serves as an important experience for him. Following a suggestion from Fermí Puig, another Catalan recruit, who works at elBulli, Ferran spends his month’s leave in the summer of 1983 at the restaurant in Cala Montjoi. At the end of this 4-week stage, and in view of the positive experience, Ferran decides to join the team at the end of his military service.

At the end of his military service, he works at the San Marcos restaurant in Seville from January to March 1984. Then, in April 1984, he joins the team of elBulli occupying the position of Chef de Partie, On November 1st, following the departure of Head Chef, Jean-Paul Vinay, Juli Soler, elBulli’s Director, offers Ferran and Christian Lutaud the position of joint Head Chefs. Juli Soler encourages Ferran to travel around France and learn more about the world of Haute Cuisine. Ferran undertakes two stages in the kitchens of Georges Blanc and Jacques Pic. In October 1986, Christian Lutaud leaves elBulli and Ferran assumes sole responsibility.

From 1987 Ferran decides to pursue his own ideas in the kitchen, leaving aside the Nouvelle Cuisine style of the restaurant. He begins by using ingredients, techniques, and local and regional elaborations, interpreting them through his vision of Haute Cuisine. Up until 1993 this “Mediterranean style” defines the cuisine of elBulli and exerts an important influence on the Catalan and Spanish cuisine of this period.

In 1990 elBulli S.L. is created, a company founded by Juli Soler and Ferran Adrià, developing different lines and models of business.

elBulli S.L. reinvests 20% of its turnover in pursuing creativity. elBullirestaurante functions as the R & D department of a company that manages consultancy and assessment for catering companies and the food industry, whilst always placing its commitment to avant-garde cuisine as its foremost concern. This model enables the radical nature of elBulli to be maintained.

In the early 90s a change in the cooking of Ferran and elBullirestaurante begins to take place, and a series of new concepts, elaborations, techniques and service formats appear alongside the “Mediterranean” dishes, reaching their full expression in 1994. From that time on, a series of constants characterises the style of elBulli, outlined in the 23-point synthesis of elBulli’s cooking.

Throughout the 90s, the team seek a successful formula for creating a workshop during the six months of restaurant closure, and after trying several locations, elBullitaller is opened in 2000, in Carrer Portaferrissa, Barcelona, becoming the first in the history of haute cuisine. Developing this blueprint, a model of creativity is established that is perfected little by little. In place of creating a dish based on an idea, ​​hundreds of ideas for concepts, techniques and elaborations are introduced during the closed season in elBullitaller, which lead to finished recipes and menus in elBullirestaurante. At the same time all the variables and resources of the process are subjected to a creative audit offering a high level of efficiency and effectiveness, which is key to determining elBulli’s creative longevity.

Ferran marries Isabel Pérez in 2002. They do not have any children.

Very sad news is announced in October 2012 communicating that Juli Soler is suffering from a neurodegenerative disease. This represents a most delicate moment during the transformation process of elBulli, delivering a blow for his family, the elBulli team, and the gastronomy sector as a whole, in which he is a reference.

This leads to a remodelling of the entire project, which had grown out of the Soler-Adrià partnership. From this moment, and without the inestimable help of Juli, Ferran tackles assessment, consulting and image projects alone. At the same time, elBullifoundation launches projects on knowledge and innovation.

The legacy of Juli, whose spirit encompasses all the actions of elBullifoundation, is maintained through the incorporation of his children, Rita and Panxo, as pillars of the Foundation.

OUR CUISINE IN 23 POINTS